In the premises and data center infrastructure world, most of us are familiar with typical fiber connectors like duplex LC, SC and ST connectors and multi-fiber MPOs. Perhaps you’ve also heard about expanded beam fiber connectors or have encountered a scenario that requires them.

In case you aren’t familiar with these connectors, their applications and testing considerations, we thought we’d help you “expand” your knowledge. How are they different?

Typical fiber connectors are considered physical contact connector, meaning that they physically align and mate two optical fibers using techniques such as index matching gel, fusion splicing, epoxy/polish or other means. In contrast, expanded beam connections are contactless, meaning that the light signal traverses a small gap between two connector endfaces. Expanded beam connectors accomplish this using use lenses to expand and collimate light signals, which essentially expands the signal from smaller fiber core size into a much larger diameter and sends the light signals in parallel to each other. The expanded beam can be as much as 150 times larger than the original fiber core. A second lens then refocuses the light into the connecting fiber, essentially bringing the light signal back down to the smaller core diameter. 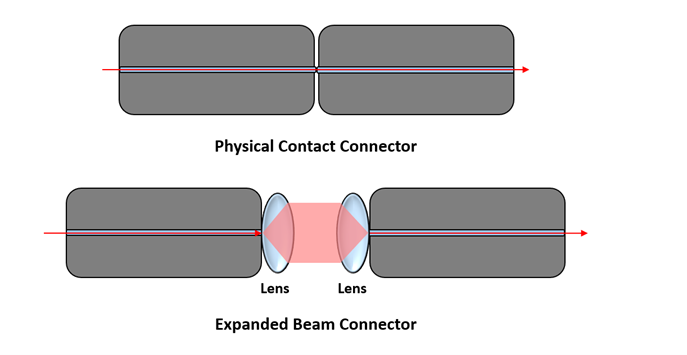 While typically more expensive due to the lenses, expanded beam connectors offer the benefit of tolerating dust, debris and other contaminates on the fiber endface. And because the two fiber endfaces don’t touch, they can withstand far more mating cycles without frequent cleaning and are more resistant to damage from vibration and other mechanical forces. These connectors are also available as non-gender specific, eliminating concern about ensuring male-to-female connections throughout concatenated links.

Where are they used?

Expanded beam connectors are typically found in harsh environments such as mining, outside broadcasting, offshore and some factory automation applications. They’re also often used in medical applications that require thousands of mating cycles and are subject to microorganisms, fluids and other contaminants found in a clinical setting.

What are the considerations?

Like physical contact connectors, expanded beam connectors come in multimode and singlemode fiber types and are available in multiple fiber counts, typically 2 to 16 fibers. They can be factory preterminated or terminated in the field using standard epoxy-polish techniques. Newer micro versions are also available with a smaller diameter to save space, but even these smaller versions are typically at least twice the size of an LC connector due to the lenses.

While you won’t find expanded beam connectors in high-speed data center applications like 40 or 100 Gig (40GBASE-SR4/100GBASE-SR4) with a maximum channel loss of 1,9 dB, in applications where insertion loss performance is not the primary concern (i.e., shorter distance and low-speed transmission), the benefits of higher mating cycles and harsh environment resistance may offset the higher insertion loss.